Where on Earth?!? Madrid, Spain

Sometimes there’s all good, sometimes there’s all bad, and sometimes it’s good and bad.  I was elated at being selected for a “Wildlife Artist of the Year” finalist, which included showing my work at the exhibit in the Mall Galleries, London.  The cost of shipping the bronze sculpture that was in the show was more than an airplane ticket, so I opted to fly with the bronze and attend the exhibit.

In the same time frame, the story of Jose [my foreign exchange student- brother from high school] took a downward turn. I learned about his dire situation shortly after buying a ticket to London.  When I received a photo of him in his current condition, it was immediately obvious that the lights weren’t on.   I added on a short round trip flight from London to Madrid.

Upon arriving on my poignant mission to Madrid, I was directed to Jose’s office with its overnight accommodations by Esther and Pablo, his adult children and immediate caretakers. The “office” of Jose was a basement in a high rise apartment complex, which obviously served as his personal man cave as well.  Upon entering, a spacious great room opened up bordered by a small kitchenette, with a stoic  dining table extending just beyond the entry way.  To the left was a tall poster depicting the cathedral of Vitoria that was labeled with the architectural office of Jose’s grandfather, who had designed this monumental edifice.  Beyond was a pool table, overstuffed chairs and random antique furnishings, some ancient and crude.  The walls were hung with portraits and scenes of another time that looked like prizes from an antique market, but were not.  They were actual portraits of Jose’s ancestors, and one pasture scene was painted by an uncle on a sheet of metal framed in painted wood.  The designated office nook with desk and couches was set prominently amidst the paintings.

One end of the grand dining table was strewn with bills and paper work, as if Jose had just stepped out from his daily routines; the other end was spotless except for  a round and leathery keepsake box that sat all by itself at the head of the table. It was begging to be opened, and with little hesitation I peered inside Jose’s guardian of treasures and froze. For there, at the very top of its contents, was a fuzzy wool mascot, the type that typically adorns high school letterman jackets. 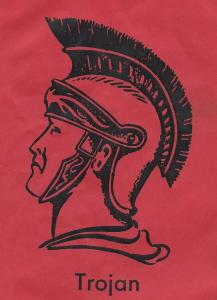 This, a Trojan warrior head, was the mascot of our high school and was only presented for the very top sports and special achievement awards.  To think that this was the top prize in his treasure box, a high school relic from almost fifty years ago, astonished me, especially considering his long career that took him all over Europe and to China, and his hundreds of friends along the way.  A multitude of buttons from a military jacket of long ago, presumably from one of Jose’s family patriarchs, were the only other keepsakes of top ranking found within.

Jose’s presence draped the large room like a loose fitting shroud, a shroud of welcome and warmth.  In his true fashion, a cookie jar on the counter of the kitchenette proclaimed “To the home of a friend the road is never long.”   But Jose was not home, due to one unfortunate event on a winter day in busy city traffic.  While on his motorcycle, a taxi swerved without seeing him, which threw him onto the windshield and ricocheted him into a steel fence that served as a guard rail beside the busy highway.  When doctors were through saving his life, it was learned that much of his mental capacity was gone, that he could not use his arms again, and would be wheel chair bound indefinitely. The ultimate prognosis was that in one year’s time he would either gain back his mental faculties, or not.

My introductory visit late in the day of my arrival was with Esther by car, and she showed me the route by metro for my solo visits.  She guided me to an old nunnery that was converted into a soulful and pastoral long term care facility. Esther constantly talked to Jose, played classical music well into his long nights, and did everything she could to soothe his hidden soul.  Needless to say, I was emotionally distraught by this first visit.

With the early morning rise of the next day, I poked around the kitchenette for coffee and found a simple manual French press that resulted in concentrated espresso.  Milk in the fridge seemed fresh enough and the countertop provided a crystal sugar bowl complete with a spoon, from which I added two heaping teaspoons to the aromatic brew.  Pleased to start the day at full velocity, I gulped at the hot beverage with delight; and immediately gagged and choked and hurled into the sink!  How on earth did this go so badly?  I searched for clues, sniffed the milk in the fridge again, and finally discovered that the sugar bowl was actually salt!  Which goes to show, no matter how familiar you are with friends of other countries, some cultural differences can take you by surprise.

The whole episode of this short weekend in the heart of the Iberian Peninsula was like a dream that I was floating through.  Here was my “Spanish brother” and close friend in an extreme state of distress and mostly oblivious to the world around him. I spent a full day in a one sided conversation, talking a constant stream of memories and hope for his future as I pushed him around the serene grounds of the old nunnery in his wheelchair. Mostly he maintained the same pose of head bent down and kicking his restless legs.  Only twice did he lift his head and gaze into my eyes with a faint glimmer of hope and recognition.

When in an abnormal and emotionally strained situation, the events and interactions around you can seem unusually strange as well.  Late that last evening, on a hot summer night in a sweltering city, I took a long stroll seeking Spanish wine and cuisine.  The grand Plaza Castilla and its traffic circle opened up before me, and two matching skyscrapers leaned crazily over the boulevard as if they were in need of a cantilever.

Disregarding the flashy restaurants around the grand plaza, I found a quiet sidewalk cafe down a side street that had a superb offering of authentic plates.  After the red wine was poured, I glanced about my surrounding.  Windows lined the street side where busy outdoor tables were set, and the interior followed clean lines of pine tables and shelves and light polished tile.  It was not overly crowded inside, and I watched as the sun began to set with an amber glow against the city skyline.

Suddenly a disk of metal flew off one of the high shelves and clattered across the floor, startling two women patrons a few tables away.  The shelving was in my line of vision and I saw the source of the action, a lineup of various dispensers. I retrieved the rolling metal and discovered it to be the lid of a salt shaker.  Salt again!  There were no earthquake tremors, no trucks rumbling by, and no extra vibrations to detach the lid from the dormant salt shaker on the high shelf.  It simply flew off.

I was reminded of that juvenile prank of middle school where the lid is removed and lightly set in place on the shaker, so the next user would have a generous portion dumped onto his meal. I also pondered over the mystery of these two encounters with salt at the beginning and end of the same day, and all the old sayings spun through my mind;

To satisfy my curiosity, some later research revealed salt superstitions from cultures around the world.

“If you spill salt, you must throw a pinch over your left shoulder to cancel out the bad luck of spilling salt”.   {Ancient Rome}

The use of salt to ward off evil:  “Evil cannot abide salt”. {Shinto}

Salt would also be thrown on a fire, and would pop and crackle to ward off spirits. {Celtic}

And appropriately:  spilled salt is an omen, “every grain of salt will turn into a tear”.

After leaving the restaurant the surreal evening continued with faint notes of music that increased in volume somewhere ahead in the dimly lit streets. It was approaching midnight and I assumed a party was gaining momentum in the neighborhoods up ahead.  As I walked on towards Jose’s “office” the crescendo arose well beyond the level of a private party.  What could this be?  Eventually I came to edge of a large park, and, unbelievably, in the middle of this greenway was a full symphony orchestra, playing at full tilt.

Filling the park were five thousand chairs set before an expansive stage, and standing room only included crowds lined up along the street to enjoy the late night performance.  I indulged in the classical notes with the street crowd well past midnight.  Imagine, in my short two day visit of this city that on this night a full symphony orchestra would be in full swing directly at the end of Jose’s street, only a long block away from his office.  It was as if it were a timely and welcome salute to my endearing Spanish brother.

I turned up his street as the crescendo continued unabated, my mind swirling from the sensory bombardment of the last forty eight hours.  Retiring to his office apartment, I shot a few solo rounds at the pool table, and spent the rest of the night without sleep. At seven the next morning I was on a plane flying out of Madrid.

The constant attention and support Jose received from immediate family is a classic example of objective reality changed by subjective persuasions.   I am convinced that if Jose was abandoned in the old nunnery he would never regain his mental faculties and would remain in the same state indefinitely.  As it were, the constant coaxing from his family exercised his brain back into a normal state of cognitive abilities.  Within ten months of the accident, by that Christmas, he got to go home to his family and his lights were back on.

This entry was posted in Artist Travels, Friends and Family and tagged Madrid, Plaza Castilla, Spain. Bookmark the permalink.