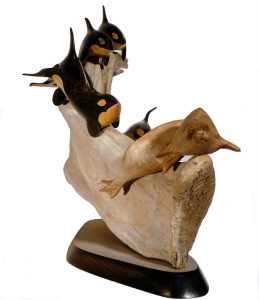 “On the Hunt”,  myrtlewood , by Terry Woodall

“On the Hunt”, a myrtlewood sculpture depicting five orcas chasing seals, was awarded to Barbara Schmidt, winner of the raffle fundraiser in support of Fragile Waters.   A carved chinook salmon was also part of this fundraising event.

As part of the movement against whales and dolphins kept in captivity, champion of the cause Veronica Wolski also orchestrated the following events that generously included the distributions of my carved and stained myrtlewood orcas. All proceeds from these art works benefit orca conservation and education.

May 2015,  Proceeds from a myrtlewood pelican perched on a driftwood post are donated to the Australian Institute of Marine Rescue.

May 2014,  Lolita and Friends Spring Fling, a fundraising banquet, auction and raffle to support the Free Lolita campaign.  “Together Again”, a myrtlewood likeness of Lolita with her mother Ocean Sun, is a hit, generating the most funds for the event, which included a guitar signed by Seattle rock group “Heart”.

The “Together Again” limited edition of 20 orca pairs, the Ocean Sun/Lolita renditions, is sold out and now closed.  [see previous article]

“Fragile Waters” is a film produced by Orca Network dedicated to raising awareness about the whales of the Pacific Northwest and the importance of providing them with healthy and safe habitats.  The primary mission of the documentary is to educate people about the Southern Resident Killer Whales of Washington State.  Orca Network & filmmakers Rick Wood and Shari Macy teamed up to tell their story with “Fragile Waters”, which is used exclusively in support of orca conservation and education.

Honored with an Official Selection to many film festivals, “Fragile Waters” was awarded film of the year at the Dolphin and Whale Film Festival in Dana Point, California.

More about dolphins in captivity:

Orcas [technically a dolphin] are the main focus of a world- wide movement against keeping these large, intelligent mammals in small- tank captivity.  Although it is unlikely orcas could survive release in the wild, sea pen habitation offers a viable alternative to the small pool confinements.

In a very recent public media announcement, Jane Goodall, champion of other intelligent mammals, disclosed her dissatisfaction with keeping orcas in captivity.

National Geographic Magazine is currently publishing a 3 part series on dolphins, which includes questioning the practice of keeping the bigger sea mammals captive in tight quarters.  The second article analyzes the viability of releases into the wild as evidenced by some successful releases of bottlenose dolphins.

By constructing ocean pens with opening gates for the mammals, education, research, and a positive connection for humans and sea mammals could still be continued without the circus type shows and permanent tight living quarters.  And freedom, so inherent in the spirit of all wild nature, would prevail.